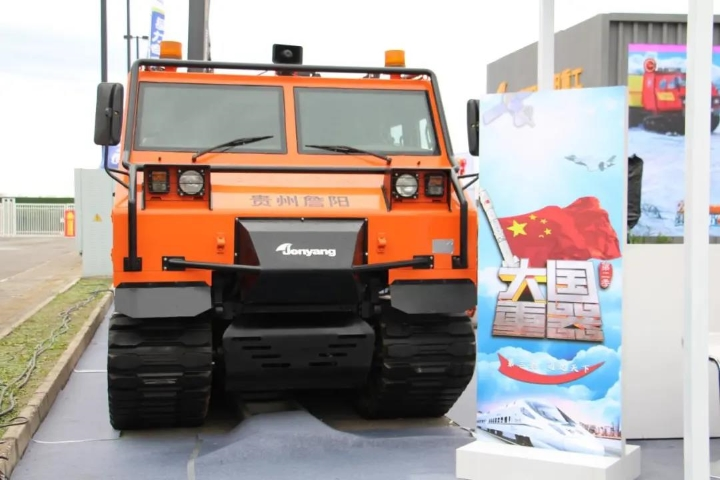 Recently, the 19th China International Fire Protection Equipment Technology Conference & Exposition was held in Beijing, from more than 20 countries around the world(Region), more than 800 exhibitors participated in this exhibition. As the "highlight" of each fire protection exhibition, fire fighting vehicles attract the attention of visitors. Among them, Guizhou Jonyang Kinetics exhibited self-developed products known as "Guizhou's Light” and” The Pillar of Great Power”, fully demonstrating its outstanding R&D and innovation capabilities in the field of emergency response area.

There are 5 products on display this time. Among them, the crawler all-terrain rescue engineering vehicle is independently developed and produced by Jonyang. It has more than 20 research and development patents and won the "2018 China Industry Award" and "China Machinery Industrial Science and Technology First Prize" as well as many other awards. This product is listed in several catalogs including the "Guiding Catalogue of Key Products and Services for Emergency Industry (2015)" . The car adopts an integral rubber track, which has strong off-road performance and excellent maneuverability. With the characteristics of amphibious, it can freely pass through complex terrain such as lakes, mountains, swamps, deserts, and snow. The modular design of the rear car body can be flexibly configured according to user needs. More than 10 types of vehicles such as communication command vehicles, personnel transport vehicles, medical rescue vehicles, snow and ice removal vehicles, and water purification vehicles can be derived from it. It is widely used in geological disasters such as earthquakes, mudslides, landslides to provide early survey, communication, personnel rescue, medical rescue, obstacle clearing, personnel transfer, water purification, oil supply, snow removal and deicing as well as other use. 2015, this equipment landed in Antarctica which marked as a "zero" breakthrough in domestic large-scale scientific research equipment.

Starting from participating in emergency rescue mission of Wuhan flood in 1998, Jonyang successively participated in the Wenchuan earthquake, Shenzhen landslide, Lishui landslide, Tianjin explosion, and various disaster rescue and disposal task, which won unanimous praise from the state and local governments at all levels. Jonyang fully demonstrated and brought into play their social responsibility and exemplary vanguard role, providing a strong guarantee for the overall economic and social development and the safety of people’s lives and property.